By designing and producing the first modular designed, and thus longer lasting, smartphone, building a conflict free and fair supply and production chain, Bas van Abel with his company Fairphone is creating a movement of ethical consumption while shifting the smartphone industry -one of the most complex supply chains- towards ethical production and complete transparency, fueling change instead of conflict.

Bas founded Fairphone to build a movement for fairer electronics, using three strategies; Firstly, by creating a smartphone which shows the whole electronics industry it is possible to produce fair and sustainable products even in one of the most challenging and complex industries (electronic consumer goods). Secondly, by designing for re-use and longer life-cycles of the various elements of the phone, he introduced the first modular phone on the market. And thirdly, by ‘raising’ a new generation of consumers that is aware of the way electronic products are designed and produced, literally creating a market for electronic products that put ethical values first. By doing this Fairphone creates a social innovation platform for all stakeholders in the electronics supply chain.

Bas’ fascination with creating (and deconstructing) things started very early in life, as he loved taking everything he could find apart to see how it worked and how it was build. This even went so far that he was always carrying a screwdriver around in order to not miss out on opportunities to take things apart. This practical approach carried through high school where he was also exposed to philosophy, which he liked so much that as a teenager he was thinking about studying theology. Bas’ parents took him and his brother on many travels which shaped his view on the world in that he started to become really interested in other cultures and particular the individual stories people had to tell. This also led him to go to India after high school which further sparked his interest in anthropological viewpoints.

He then went to study at the academy of the arts, where he specialized in interaction design. For his graduation project Bas created a table for children with motor impairment. This design was offered €200k in funding by a toy producer, but he didn’t feel ready yet to take on this project and let two of his study colleagues take it on.Nominierte und Gewinner
As part of the Dutch Think Tank Waag Society, Bas he played a key role, in the initial maker movement and brought the idea of Fablabs to Europe. The people behind the fablab at MIT had everything worked out in theory, but they were not able to put it into practice. Bas was able to create momentum for this open hardware movement by implementing a new approach to documenting and using the labs in a way that everybody benefits from it. Bas co-edited the book Open Design Now, which seeks to transform design into an open and shared discipline that creates a diversity of innovative products through a collaborative and world-spanning process. At Waag Society Bas was the one making things happen that were outside the rule book. He became the creative director of Waag Society where his idea for Fairphone emerged from a campaign that focused on the problem with conflict minerals in the Democratic Republic of Congo. It was from here that the idea matured and led Bas to set up his second open hardware movement, Fairphone.

Bas is somebody who combines hard skills such as mathematics, scientific thinking, and programming with very playful and creative approach to life while still having far reaching pragmatic capabilities in his enterprising. 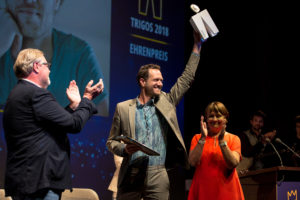